When I was a boy, “social media” meant mostly baseball gloves and footballs. These were the primary means of our interactions with our peers. We played endless games on our suburban streets, in our connected backyards, in neighborhood parks and even – when local school officials were insufficiently attentive to the locks on their gates – on actual ball fields. If we had enough kids – and at the tail end of the Baby Boom, we often did – we’d play 11-on-11 or 9-on-9 as the season demanded. If too many kids were sick or grounded or on vacation, we engaged in endless personnel adjustments to make the games even. Somebody might be the designated quarterback for both sides. Or the hitting team might provide its own catcher. But there was one position that was never filled: No one was going to waste valuable play time being the referee or the umpire. 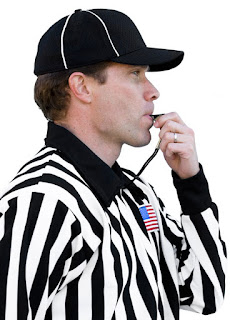 With the exception of the occasional squabble, our honor system worked a treat. If you stepped out of bounds (that is to say, into Mrs. Scheimann's yard), you stopped where you were. If you missed the tag before Billy Miller made it to the back corner of the Buick, you said so. And if too often you didn't, you were subject to the ultimate sanction: Kids who couldn’t be counted on to call it square – on themselves most of all – found their doorbell stopped ringing, because nobody cared if Mikey could come out to play, if Mikey was a duplicitous sneak.

This notion, that your personal integrity and commitment to fair play were paramount, was inculcated into us at every turn, from our earliest days. You memorized “If” in the fourth grade. They told you George Washington couldn’t tell a lie about his stint as a junior arborist, even at the risk of a licking* – and this when you were young enough that ending up over Dad’s knee was an all too available consequence of your own confessional inclinations. Long before the age of participation trophies, we prized the ones they gave out for sportsmanship.
On the not-so-mean streets of 1960s Cleveland Heights, your rep was as important to you as to any inmate on the prison yard. Simply put, we all wanted to win, but we were taught to revile the idea of winning at any cost, and we did.
If nothing else, this grotesque presidential campaign is demonstrating conclusively that this fundamental truth from my boyhood is now passé. It's not the candidates and their legions of professional apparatchiks who demonstrate this. Those sorts have been ever thus, and we would never have let them play with us anyway. Rather, what is worrisome – indeed, what is frightening – are those people whom one respects or even admires who have, more easily than one could have imagined, abandoned all standards, beliefs, and philosophies they once held dear, who have traded their own integrity, all in sacrifice to the singular value of seeing their side win.

They have deemed principles not merely articles to be ignored, but luxuries to be scorned. And if you hold to yours, then, at best you're a fool or a patsy – but more likely you'll be denominated a collaborator.

Their justifications are as they always have been:

"This time is different."

“The circumstances are exigent, extraordinary.”

“After the coup, we will promptly restore democracy, reinstate civil liberties and release those whom we have interned.”

That last one wasn’t from this election. It was from every military coup, by every jumped up dictator since Julius Caesar.

And here’s the thing: It's working. Whichever candidate prevails as the prettiest pig at the fair, this declaration of vice as virtue seems certain to win out. And for those who have embraced this anti-philosophy, there's no going back. To paraphrase Robert Bolt paraphrasing Thomas More, once you let your values slip through your fingers – or, as in this election, once you toss them to the dirt – they cannot be picked up again.**

And like the kid who wouldn't take his out, when the election is over, when your chosen, favored, power-hungry narcissist is measuring the drapes for the Oval Office, you’re going to be faced with what I wish I could claim is one of Robert’s Rules, but which I must fairly attribute to Buackaroo Banzai:

Wherever you go, there you are.

To what exigency will you appeal then, when you find yourself with all the time in the world? What lie will you tell then, when there's only you to hear it?

Who is going to want to play with you then?

[UPDATED to add, that this is the sort of thing I mean by winning at any costs. And to say that support of tactics like this isn't theoretical. People I respect have told me this or that candidate must be stopped, and so. . . ]


* They did not, of course, tell us that this story, designed to inspire forthright honesty, was utter propaganda.

** What the theatrical More said was:

What is an oath then, but words we say to God?
Listen, Meg. When a man takes an oath, he's holding his own self
in his own hands like water. And if he opens his fingers then,
he needn't hope to find himself again.