Of course, I entirely defend the right of these cheese-eating surrender monkeys to publish this cover or, indeed, any damned thing they wish. For those who, eschewing a study of French, have wisely dedicated themselves to learning the language of a relevant world power, it reads: "God Exists! He Drowned All the Neo-Nazis of Texas." 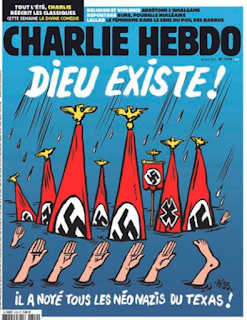 I'm not angry or disappointed because, I confess, my expectations are low. We've already discussed here the lack of moral consistency by the Gauloise-sucking "journalists" at Charlie Hebdo. And let's be honest, the Germans may have invented the word schadenfreude, but nobody does it better than the French. And I know, too, that Nazis are a bit of an uncomfortable subject for the French, given their legacy of well-earned national shame. Gazing upon this cover, they must have to wonder if a timely flood would have somehow stopped them handing over Jewish schoolchildren for annihilation in exchange for the Germans not burning down some museums. (Not that the French didn't then mount a fine resistance. Courageous cafe owners frequently over-charged German officers for espresso.* And many French housewives valiantly gave German soldiers painful venereal diseases in exchange for stockings and cabbages.)

But . . . here's the thing. You would think that if anyone would not want to rob the swastika of all of its meaning, it would be people who lived under the brutal occupation of actual Nazis. Calling all the victims in Houston -- a city that, for one thing, overwhelmingly votes Democrat -- "Nazis" would seem to me to do just that. And it's a glaring example of what's wrong with our own discourse here in recent months.
You see, people who don't believe that the military should enlist transgender service members aren't Nazis. They might be right. They might be wrong. They might be motivated by hate, or fear, or merely a concern for the marginal costs of issuing all those new nametags. But they aren't Nazis -- well at least they aren't Nazis just because they disagree with you about the intersection of gender identity and the armed forces. That guy who favors immigration amnesty for "dreamers?" I guess he might be a socialist, but his stance on that single issue offers you insufficient data to reach any such conclusion. And the small-town florist who doesn't want her great-great-granddaddy's statue ripped out of the courthouse square? It's not likely she's an actual fascist however troublesome you find that bronze fellow on the horse. But when you bandy about a word like "Nazi," even though it has the effect of rendering your opponents less than human -- always handy when you want to douse them with jars of your own urine or peacefully beat them into silence -- it also has the effect of sucking all the meaning from the word. And that's not good for anyone. (I mean, if nothing else, don't the folks who called George W. Bush a Nazi now wish they'd kept that epithet in reserve?)

More than six years ago, I wrote in this space about the Theory of Ubiquitous Polarity.** I wrote then from a place of personal frustration, calling for nuance. These days I see it underlying something far more dangerous. Because if you render every disagreement on any policy and procedure into a definitive identity for the person with whom you disagree, if you view everyone on the other side of anything as being a member of a class of the fundamentally evil, you leave yourself with nothing to do but go to war. That's what you do with actual Nazis. And by the looks of recent events, war is more or less where we're going.

** "A system under which an observer believes that all beliefs must necessarily be aligned in whatever manner the observer himself aligns them."