As the rising sun pierced the billowing gun smoke that April morning 240 years ago this Sunday, I suspect the British regulars were thinking something along the lines of “Well, that’s for them.” The truth is that the “Shot Heard Round the World” echoed over an inauspicious field abandoned by a beaten militia in full flight. The only would-be rebels who remained on the Green did so because they were dead or dying. 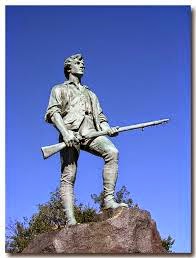 So British Colonel Francis Smith might well have thought that, with one lot of traitors shown conclusively who was master, well begun was half done and the day portended well for King George III. It must have been with more than a little confidence that Smith turned his troops down the road toward Concord, where Tories and spies had reported the nascent rebellion had a large cache of weapons.

But neither Smith nor his executive officer, Major John Pitcairn – much less King George – had heard American Captain John Parker addressing his militiamen just before dawn. The rebels had waited through the night to see if the British foray into the countryside was just another reconnoiter in force, or something more sinister. Paul Revere and his fellow riders assured them the regulars were on their way intent on disarming the budding rebellion.  As the British entered the green, the militiamen assembled from Buckman Tavern and elsewhere to face them. Parker reminded them that while their foremost purpose was to merely demonstrate their resolve, more than that might well be demanded of them.

“Stand your ground and do not fire unless fired upon,” Parker ordered. “But if they mean to have a war, let it begin here.”*

Faced off across a space no larger than a football field, Parker and Pitcairn each commanded their respective forces not to fire. Pitcairn had every reason to expect to be obeyed; British regulars did as they were ordered and Pitcairn’s force of elite light infantry were some of the best troops of the best professional army in the world. Parker, commanding farmers, merchants – and a slave named Prince Estabrook – likewise expected to be obeyed, if for no other reason than because his men had families close at hand, some watching from just off the field.  Greek governmental theories, philosophical abstractions and offenses such as the Intolerable Acts may have driven rabble-rousers like Sam Adams and his Sons of Liberty. But for the militiamen on Lexington Green, their homes and farms and livelihoods were all too tangible realities, all too close at hand.

So no one was meant to fire a shot, but as it as has time and again throughout the years, the shot nevertheless was fired** and then everyone on the field let loose. It was over in minutes and the outcome, with many rebels killed or wounded, and only one of his own men hurt, couldn't have surprised Pitcairn, who couldn't have had much doubt about how the rest of the day would go.

But it was only dawn. And he hadn't heard Parker.

Pitcairn couldn't have understood at that moment that he hadn't just been a part of a police action or some noisy civil disturbance. Because he hadn't heard Parker, because he didn't know who these Patriots really were, Pitcairn didn't know then that he’d really been a participant in the first skirmish of a remorseless war. But he was soon to learn.

By the end of that very day, after the desperate running fight down the Battle Road, as the blood ran from the North Bridge to stain the Concord River, Pitcairn could not help but to have had a better understanding of what war with real Americans would mean: All told the rebels had lost 88 men killed and wounded. The butcher’s bill for the most feared and powerful military force in the world was nearly twice that, at 147. By the very next morning – without the aid of Facebook or a single cell phone –  15,000 men of what would eventually*** become a victorious Continental Army were outside of Boston.

This nation was born of blood and smoke and outrage and an abiding sense that "Enough is enough, damn it." It was born when a secure and prosperous people finally decided that their liberties were more dear to them than their comforts. I am convinced that Americans -- or, at the very least, enough Americans -- still fear blood and smoke less, and love liberty more, than they love their comfort. I believe that Americans still know their way to the Battle Road. I believe this, I confess, in part because I must believe it, or else despair.

* Indeed, many of the militiamen may not have heard Parker, either. Her suffered from tuberculosis and had trouble mustering enough breath to speak.

**Theories vary wildly about who fired first. The best evidence, I think, suggests that it was one of the spectators, townsmen arrayed around the green, but not under Parker’s command.

*** "Eventually" in spades. In the eight years, four months and 15 days from that day to the Treaty of Paris, there would be some 150,000 casualties, suffered overwhelmingly by the Americans and their families, fighting on their own doorsteps.
Posted by Robert Kuntz at 10:32 AM No comments: