The truth is that I don’t love guns. I appreciate guns. I am pleased to discuss guns. I enjoy competing and training with guns. Guns have a crucial place in my defense of myself and my family. But the gun qua gun, the gun as an object, doesn’t much move me.

I am no kind of collector. Plenty of fellows have safes full of interesting specimens. Me? I own one each of two kinds of rifle, a single shotgun and several handguns, nearly all of which look more or less like this object of beauty: 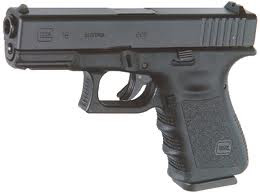 But you protest that this is no beauty? You say you see a brute, industrial hunk of black plastic and metal? When I said beautiful, you had something else in mind? This perhaps: 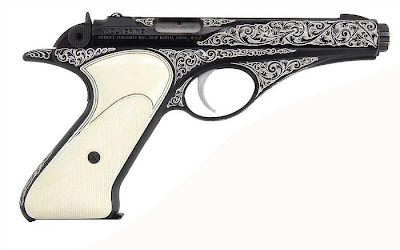 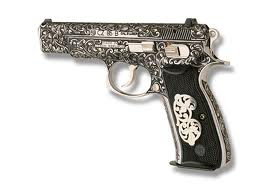 What makes a firearm beautiful to me, what I admire above all other qualities, is reliability – the weapon's ability to function as it is supposed to function tens of thousands of times in a row without a single failure. Certainly a firearm ought to fire a caliber useful to the task; and of course I need to be able to shoot that firearm accurately enough to put rounds into a useful part of the target. But if a gun will only do that 999 times out of thousand, it’s of no use to me. That weapon might belong in some collection, but it doesn’t belong in my holster.

Thus, my relationship to firearms is a utilitarian one. Their possession serves an essential, but narrow purpose. They exist to accomplish a task. They are the necessary tool for a job I hope not to have to do. One might as well speak of a pretty life insurance policy. For me, collecting guns would make the same sense as collecting hammers, or circular saws, or snow tires.  Like some hoplophilic disciple of Louis Henry Sullivan, I demand that, and am pleased when, a gun’s form follows its function to the essential exclusion of all other aesthetics.

The function at issue is defense of life in gravest extreme. If such defense of your life and the lives of others is a God-given natural right -- and it is -- then your choice of the tools you employ in that exercise is necessarily a matter of great moment. To be clear, it's not even slightly as important as having the right mindset or sufficient training. But tools do matter, and among the tools I choose is the ugly black pistol pictured above, a Glock 19.

The Glock 19 is a slightly more compact version of Austrian gunmaker Gaston Glock’s genius innovation, the Glock 17. The Glock 19 fires a 9mm round, which means the bullet that leaves the barrel is, near as makes no difference, 9 millimeters in diameter.* In usual practice, those bullets weigh from 115 to 124 grains** (with heavier weights available for special purposes).

The Glock 19 is a semi-automatic pistol: After the user loads and cocks it by inserting a magazine and racking the slide (pulling the slide back and releasing it) the pistol will fire one round each time the trigger is pulled. Instead of an external hammer, the Glock 19 has an internal striker to impact the primer in the base of the cartridge.*** The recoil from each fired round operates the slide, strips the next cartridge off of the magazine stack, loads the round into the chamber and cocks the striker, so that the next pull of the trigger will release the striker, ignite the chambered round and start the cycle all over again. Here is a nifty video animation of what this all looks like.

I have a Glock 19 from the year they were released in the United States, a so-called “first generation” version. With the occasional replacement of springs over the past 21 years, this pistol has undergone the described firing sequence in excess of 40,000 times without a single failure. I don’t love guns, but you have to love a machine that has worked just as it should 40,000 times in a row. The newer Glock 19 that I carry every day is a later generation, and so far only has 10,000 or so rounds through it without a failure. But I have ultimate confidence that the next time I pull the trigger, it will do exactly what it is supposed to do.

Robert’s Rule states that “Simplicity is Murphy’s only natural enemy.” At the core of what makes this pistol reliable (which is to say beautiful) is that it is about as simple as a pistol can be.  It takes perhaps two minutes to learn how to “field strip” the Glock 19 – that is, to disassemble it into its major components for cleaning and maintenance. Each time after that initial tutorial, field stripping and reassembly take about 12 seconds each. No tool is necessary to accomplish this. Beyond that, the pistol can be completely disassembled into its only 35 parts with a simple punch in perhaps a minute.That's kind of lovable, too.


Another of Robert’s Rules holds that “Only a fool tries to say better what has already been said perfectly.” Better, like  a good reporter, to quote with full attribution:

"I do not love the bright sword for its sharpness, nor the arrow for its swiftness, nor the warrior for his glory. I love only that which they defend" J.R.R. Tolkien, via Faramir, in The Two Towers.

* Most handgun rounds are described first by diameter, either by “caliber,” as in .38 caliber, which is the diameter in decimal inches; or by millimeters, as in the 9mm. This can get a little arcane as the 9mm is close to .38 caliber, there is another round called the .380, which is the same diameter as the 9mm but, shorter – and called the 9mm kurz in Germany, and so on. Common calibers in modern defensive handguns include:  .38 Special, .357 Magnum (actually the same diameter as the .38), 9mm,  357Sig, .40 S&W, and .45ACP.

** Grains are units that measure the weight of the bullet – the projectile – only. There are 438 grains in an ounce; 7,000 grains in a pound.

*** A cartridge is an assembled “round” of ammunition, with a case containing gunpowder, holding a bullet (the projectile which leaves the barrel) at the front and a primer (a small, pressure sensitive disc that ignites when struck).
Posted by Robert Kuntz at 6:01 PM