In the wake of the tragic shooting of Rep. Gabrielle Giffords, the killing of six others and the wounding of nearly a dozen more, it was a simple certainty that – along with grief and national introspection – nonsense would follow. This is what happens , not just nowadays and not just in America, but through all of human history. Grief does not grow good policy; the frightened are seldom wise. 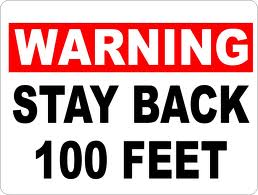 For an apt, enormous and spectacularly disturbing example, one need only look back at the Uniting and Strengthening America by Providing Appropriate Tools Required to Intercept and Obstruct Terrorism Act* of 2001. You may recall it as the USA PATRIOT Act. It is a fine manifestation of Robert’s Rule that the more contrived a law’s acronymic name, the worse the law. (A relationship of inverse linear proportion.) The corollary to this Rule is that acronymic names that invoke patriotic signifiers or the names of animals betide even worse laws. (A relationship of inverse geometric proportion.) I haven’t done the math, but I would suppose that the lousiness of legislation that has a cutesy acronym which actually employs the word “patriot” is measured both inversely and exponentially.

Thus an event like the Arizona shootings must be expected to stir this same impulse, which arises not only from grief and fear, but from the irresistible desire most folks have to make things better once it is too late. This impulse is then elevated into idiocy by legislators smarting from a tragedy-freshened realization that most of what they “accomplish” is irrelevant, if not patently inimical, to the wellbeing of those they are set to govern. And so I give you Rep. Peter King (D-NY3) who is proposing national legislation that would make it a crime to possess even an otherwise lawful concealed firearm within 1,000 feet (a fifth of a mile) of an elected or appointed federal** official.


“We have to have regulations modified and improved, enhanced,” said King, in a recent article. “Laws have been passed; they haven't been sufficiently enforced. The regulations have not been inclusive enough, so we have to move forward on that.”

I propose that we call the law The Stopping Armed Violence In Neighborhoods, Groups, Real Estate, Peoples’ Residences and Everywhere Senators Ever Navigate, Travel, Attend, Tour, Investigate, Visit, Embark or Stay Act (acronym: The SAVING REPRESENTATIVES Act), but I don't fool myself into thinking the good congressman reads this blog.

What, one must ask, does Rep. King imagine will take place in the corkscrew caverns of the demented mind of any subsequent Jared Lee Loughner, with such a law in place? Does he suppose the armed, angry and deluded paranoiac reasoning thus:  “Well, I sure would like to drive down to the Safeway and take out that federal official. Maybe that would quiet these damned voices in my head. Yup, people need to die until I am out of bullets if I can have just a moment’s respite from this pounding bloodlust. Oh but wait. I am stymied. I’d have to get closer than 1,000 feet to that federal official with my gun, thus violating Rep. King’s new law. And that , sir – that I will not do.”

Now, I don’t know Rep. King. Chances are I probably won’t know any of the scores of legislators who will doubtless line up to co-sponsor his bill. But if I assume that he is not terminally stupid or clinically insane, I am left to wonder about his motives. Because – if he is not a moron or a loon – he cannot possibly imagine that his ridiculous, impossible, impracticable, nonsensical proposal*** can ever protect anyone from anything.

Well, at least that's the only silly law this horrible crime will inspire.

* That really is its name.

*** I have omitted here any discussion of the obvious, abundant, fatal impracticalities of such a law. You’re reading this blog, so you are clearly smart enough to figure them for yourself. I do note one benefit, which is that all “elected or appointed federal officials” will presumably be required to wear large, self-illuminating name tags identifying themselves, so that we mere armed citizens can attempt to comply with the new law by fleeing headlong at the sight of them.
Posted by Robert Kuntz at 10:35 PM