Who you gonna call?

Go and find a cop. Ideally, find one with 20 or 25 years of service who has spent his entire career in a patrol division, cruising the streets in a prowl car and answering calls. Now ask that cop these questions: How many armed robberies have you stopped while they were occurring? How many in-progress rapes have you broken up? How many times have you caught an armed burglar still in the house with the family he was victimizing? Then ask that cop this: How many reports have you written after the fact for armed robbery, rape, or home invasion? 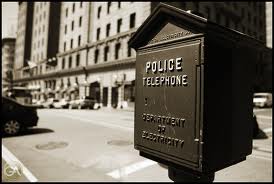 I know to a metaphysical certainty that the numbers corresponding to the first set of questions will be vanishingly small compared to the numbers in the second set.* How could it be otherwise? Unless a lawman is on your block – or, for that matter, in your driveway – when the call comes, you cannot reasonably expect him to be there before the deed’s been done.  It’s one of Robert’s Rules: When seconds count, the police are just minutes away. (I didn’t make that one up, but it’s one of the Rules nonetheless.)

So I’m always stumped by the credulous, even irrational, faith of folks whose plan to defend themselves, their family, their home or their business is a call to 911. They have to know the Rule intuitively, if not from experience, don’t they? Yet they live like it isn’t so. It's hard to imagine them being similarly ignorant of the acceleration of gravity, so that they decide to take the window instead of the elevator to get from the top floor to the lobby.

Which is why I suspect that the failing is not intellectual, but moral.  I’d posit that these folks aren’t really ignorant of the capabilities and role of their local police department, but that they simply find it unpleasant to contemplate. Like Matthew Harrison Brady, they don’t think about things they don’t think about. They don’t think about what’s going to happen before the law arrives – or, more to the point, what they ought to do before the law arrives – because it doesn’t square with the popular lie, into which they have been steadily indoctrinated, that their security and their families’ security, is someone else’s lookout.

Lord knows, the indoctrination is ubiquitous, relentless and not easily resisted. My poor television is never so much in peril as when a TV journalist (now there’s an oxymoron) concludes yet another report of a citizen triumphing over a would-be bad guy the way such stories are always concluded: With the anchorman arching his eyebrows up under his blow-dried coif and scolding that, although it magically worked out this time, viewers should never consider similarly “taking the law into their own hands.” As if the talking head is peeved to have to report on a data point that falls outside the unified field theory of dependency.  As if defending yourself and your family were some form of vigilantism, instead of an absolute, God-given right and a sacred, non-delegable duty.

In a world where all manner of bad things happen, you cannot perfectly protect yourself or your family from all of them. But if you do not equip yourself as best you are able with the means, the training and – most importantly – the mindset to defend yourself and them from those bad things that can be met, countered, ameliorated, deterred, defeated or killed, then you’re a wastrel or a fool or a coward – or some admixture of the three.


*This statement is not theoretical, it is empirical. I come from a family full of cops. One in particular, my uncle Bill (EOW 11-20-75) had a tremendous influence on me and his on-duty murder when I was fifteen resonates still. My professional life has been spent in close association with cops. I recreate and socialize with cops and ex-cops.  I’ve asked every cop buddy I’ve ever had (and there are lots) and all of them – cops with 5 months on the job and cops with 35 years on the job – have said the same. The only exceptions: Those guys who served on crime suppression teams, what we used to call stakeout squads. And all of those will tell you those exceptions applied only while they were on those units, and only in the rare places such units were deployed.
Posted by Robert Kuntz at 11:55 AM